Google has officially launched its open source Site Kit WordPress plugin that gives website owners insights into how people are using their websites, drawing from integrations with myriad Google products.

This is a big deal because Google is a leading driver of internet traffic and website monetization, while WordPress underpins more than a third of all websites. Site Kit has, in many ways, been a long time coming. Google first teased Site Kit last December, before introducing it in developer preview back in June. From this week, it’s available to everyone globally.

Google has said it plans to expand the plugin’s integrations in future. 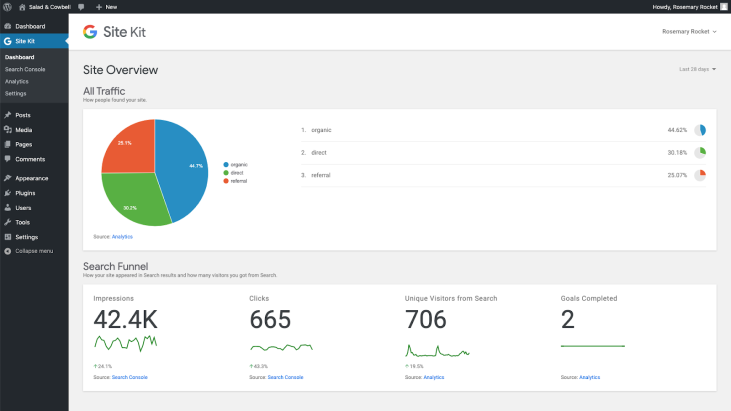 During the beta phase, Site Kit required some advanced web development knowledge, including familiarity with Google Cloud Platform verification and OAuth. For the public plugin launch, Site Kit has been iterated to make it easy for users to verify ownership of a site without having to dabble in the site’s code, using the Site Kit setup wizard.

Post-configuration, the website owner can get notifications that include at-a-glance data snapshots, such as an alert when they hit a record visitor milestone. They can also dig down to see how each specific page on the site is performing, in terms of clicks, impressions, users, sessions, and where traffic is coming from.

But data is only so helpful — it’s what you do with the data that’s important. Integration with PageSpeed Insights, for example, shows WordPress site owners how well their site is performing in Chrome, with recommendations on how to improve it. And by tethering to AdSense, site owners who are trying to monetize through Google’s ad network can track their ad performance.

Site Kit could also prove useful for agencies that manage one or more websites for a client, as it makes it easier to compile reports without having to copy data from disparate products and data sources.

It’s worth noting that plenty of other third-party services replicate much of this functionality, but they often come with a subscription cost and/or require the user to paste code into the site’s backend. Site Kit doesn’t bring specific new functionality, as such, it’s more about aggregating features and making them easier to use — without costing users a bean.

Moreover, Site Kit should save more than a little spadework for website owners who manually check various Google services in each of their standalone dashboards. With Site Kit, everything is visible centrally within WordPress.

Any cookies that may not be particularly necessary for the website to function and is used specifically to collect user personal data via analytics, ads, other embedded contents are termed as non-necessary cookies. It is mandatory to procure user consent prior to running these cookies on your website.